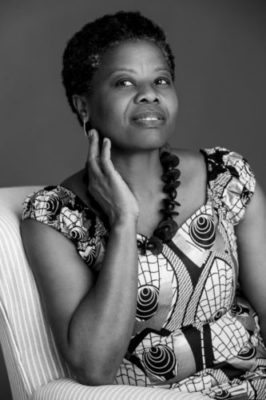 Rootencial is delighted to introduce Angela Nzambi, a writer native of Lía, a town in the district of Bata – Equatorial Guinea, who also works with refugees, and whose writings are inspired by personal and professional stories.

JB: Who is Angela Nzambi?

AN: I don’t know how to answer to the question of ‘who I am’. To define myself I tend to refer to aspects of my own self which I cannot and/or do not want to change, such as my physical traits, my gender, my culture of origin, the culture related to the origins of my ethnicity or people, Kwasió-Bisió. All of this positions me in a specific geographical and historical space. As a person, I consider myself to be “in process”. I work for a social organisation which advocates for human rights, as Social Engagement and Political Impact Officer.

JB: What did you want to be when you were younger?

AN: As a young person I wasn’t clear about what I wanted to become; one day I wanted to be a stewardess, the next an economist, and the next a writer. Perhaps the idea of becoming a writer is gaining ground, it is also a form of communication, and that’s what I’m really dedicated to.

JB: What prompted you to write? How did you start writing?

AN: A wealth of experiences, based on the stories told by my grandmother and other elders of the village. In my book Ngulsi I describe one of those moments, sitting around a wood fire. Then the image of my father reading, he was always reading, with a notebook where he used to take notes. Some of my teachers also influenced me in that sense, because I wanted to talk like them. I started writing in some notebooks where I collected facts, events and experiences from my family home and my town. Some of those stories are also told in Ngulsi, as are other stories from my personal life or experiences of childhood, adolescence and youth, the emotional feelings, the losses.

The topics I write about now have a lot to do with my work, so those two facets of my life, at present, feed on each other. Some topics somehow come to me naturally – gender, cultural identity, migration – but when writing about them, I am able to approach them from other perspectives.

JB: Let’s talk about your first book “Ngulsi”, what inspired you to write it?

AN: I like writing books about facts, events, and day-to-day experiences, including from my own life; those that seem transcendent and I consider to be relevant; about memorable people and moments which I wish to preserve. Now it is clearer to me. Ngulsi maintains that principle only that it is contextualized in a familiar and cultural environment.

JB: You also work for the Spanish Commission for Refugees (CEAR), and through your second book, “Biyaare”, you show the importance of immigration and cultural identity. Why do you think that it is important that we invest in the social integration of refugees?

AN: It’s not just about [the integration of] refugees, but of all those communities that need it such as immigrants and ethnic minorities. There are several reasons why it’s important, ranging from the defence of the equality of rights, justice and social cohesion, to the sustainability of the system, the market. Because of their utilitarian nature, however, I would not defend markets, but they do exist. And otherwise, what would be the best alternative?

JB: What are the greatest challenges that you have had to overcome, or that you currently face in your work for CEAR and as writer in the cultural context in which you work?

AN: The topics I write about now have a lot to do with my work, so those two facets of my life, at present, feed on each other. Some topics somehow come to me naturally – gender, cultural identity, migration – but when writing about them, I am able to approach them from other perspectives.

My job is, basically, to counter some of those narratives. I convey a message of solidarity for the people my organization serves, to the rest of the community. One of the biggest challenges is how to do this, which is a question that I ask myself every day. Another one is to understand that this is a continuous endeavour; I don’t know whether some day we will be able to say that all prejudices and stereotypes no longer exist. All of those factors make integration difficult. And in my writing I bring together all of these fronts: the fact that I embody various aspects which are product of prejudices, stereotypes or discriminations enables me to express myself from all those angles. That’s what I do.

It’s true that we exacerbate differences; I think it’s explained by the fact that we live in an environment which has stories of ‘winners’ and ‘losers’, and supremacies that some people want to maintain by inventing narratives, because they favor some groups, and those narratives underlie certain policies. How much truth is there in much of what is said? They are not right. And they know it.

JB: What are you most proud of in your professional career?

AN: The very fact of partaking in something that looks to me so noble, in favour of equality amongst people and social justice, and in projects and actions of solidarity.

JB: Let’s return to literature. Which is your favourite book? Which book most impacted you, and why?

AN: I like to read. It’s one of the things I do the most. I don’t yet have any book that I consider to have impacted me the most. I hope to be able to read many more books. Given its influence on my writing purpose, I would mention Ekomo, a novel by my compatriot María Nsue. I have also been captivated by other books such as So Long A Letter, by the Senegalese writer Mariama Bâ, Our Sister Killjoy, by the Ghanaian writer Ama Ata Aidoo, and One Hundred Years of Solitude, by the Colombian writer Gabriel García Márquez, I enjoyed spending time analysing the characters.

JB: What’s the best lesson that you have learnt to date in your personal life and professional career?

AN: At present I am unable to clearly separate my personal life from the professional, it is as if both were part of a whole. One of the lessons that I have learnt in my life is that of persistence and to enjoy the processes and moments which are offered to me in connection with everything that I wish to be part of my being, my life, everything that I can choose: the nurturing of my own self, the person I want to become, the values that I wish to internalise, how I wish to live, with my ups and downs, the things I like doing, which I then develop; the people with whom I wish to share my life, I try to dedicate time to them; those aspects of my life which I like; my writings and everything that they bring to me.

JB: If you could go back twenty years, what advice would you give to the Angela Nzambi of that time that you could share with today’s youngsters?

AN: (Laughs) I don’t usually give advice, it is as if I were positioning myself in the place of someone who does or has done everything right. It is not my case in the slightest. What I say to the Angela Nzambi of twenty years ago, from today’s perspective, is that she did things the best she could, that mistakes are also part of life, and that you have the right to a fulfilling and happy life.