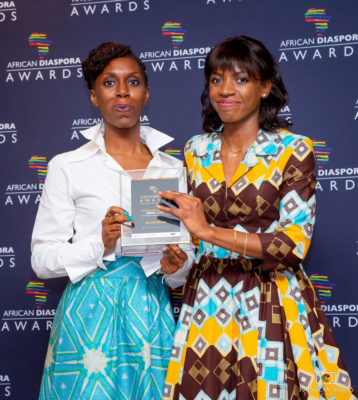 The African Diaspora rolls out 2019 Honours

The 2019 edition of The African Diaspora(TAD) Awards took place on Friday 15 March at a dinner gala at The Mayfair Hotel where various individuals and organisations were honoured for their contribution and promotion of Africa. Rootencial was delighted to be part of the partners and present the Rootencial African Diaspora Honorary Pioneer Award.

The Awards were brought  by CMG International Media Group in association with headline Partner Brand South Africa and Co Sponsored by WorldRemit. Brand South Africa is a movement that promotes a positive brand image for South Africa around the world and was established in 2002. Their main objective is to market South Africa through the brand’s campaign and creating opportunities that lead to Foreign Direct Investment (FDI).

The awards ceremony which was hosted by BBC Africa’s Lukwesa Burak attracted a full house that included some of the leading lights within the African diaspora in the UK from the community and business world.

The keynote speakers were the UK Country Head for Brand South Africa Pumela Salela and Dr Ismail Ahmed, the founder of WorldRemit and they both spoke about the need for Africa to continue making inroads towards being self-sufficient by providing solutions for their own problems and promote regional integration.

Among those honoured was luxury designer and entrepreneur Alexander Amosu who runs Lux Afrique, a lifestyle and concierge service. Amosu has also designed various exclusive luxury phone designs for Motorola, BlackBerry, Samsung and Apple. His various business interests include entertainment, publishing (OK! Magazine)as well as a cigar company, an unprecedented feat for an African owned business in the UK. The honour was in recognition of his exploits in business and contributions to the community.
Other notable recipients included the African Foundation for Development (AFFORD) which pushes African interventions for sustainable development of the African continent.

Sony Music’s Taponeswa Mavunga who is the Head of Publicity at Columbia Records UK and is credited for her influence in promoting Afrobeats movement in the UK was also recognised. Inspirational entrepreneur and Communications expert Mavis Amankwah was also honoured for her thought provoking content and diversified skills which lead to a greater platform and prominence for issues directly affecting Africans ad the world.

Michael Berhane was also honoured in recognition of his work with peopleofcolorintech.com in creating a platform for people of colour in the technology industry. Ghanaian star Fuse ODG was also recognised for his contributions back home which include building schools and organising festivals and has been one of the supporters of the Year of the Return initiative.

Tutu Foundation chairman Clive Conway has overseen growth at the foundation which has run projects that include a mediation service for the NHS and working with disenfranchised youths in Northen Ireland and improving police and youth relations. Aya Consulting founder Muna Lobe, Agnes Gitau of GBS Africa, Vanessa Amadii-Ogbonna and Glam Africa founder Chioma Onwutalobi were also among those honored.

The African Diaspora Awards are a brainchild of Conrad Mwanza and continue to grow in leaps and bounds since their inception and continue to push their vision forward with partnerships such as the 2019 edition’s Brand South Africa which is a brand that seeks to market South Africa in the diaspora and attract foreign direct investment.